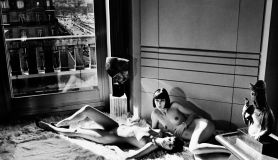 People, who like culture, are good people. And the lovers of art never get bored on a place like the capital of Hungary, the wonderful Budapest. The several museums and galleries of the city offer lots of different exhibitions to charm the audience. Just like in the Museum of Fine Arts in Budapest, because there will be a traditional photo exhibition in it.

Helmut Newton was born in 1920 and died in 2004. He was one of the most provocative and talented photographers of the world. The Helmut Newton Stiftung cares about his lifetime work in Berlin. The museum and this foundation works together on this exhibition.

Do not miss Helmut Newton’s photo exhibition between 4 April 2013 and 14 July 2013 in the Museum of Fine Arts in Budapest! Let the art to whirl you itself, and spend a lovely afternoon with the fantastic pictures! Have a nice time!