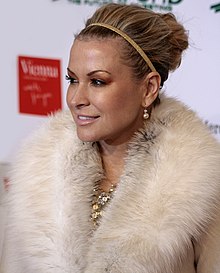 September 6 Anastacia will visit Budapest, not because she wants to see the Castle (though she might want to) – but because she wants to have a concert showing her talent to all her Hungarian and international fans. The concert starts at 20.00 and will be held in the SYMA Hall, close to the Puskas Ferenc Stadium and the Budapest Sportarena.

About Anastacia (source: Wikipedia)
Anastacia (born Anastacia Lyn Newkirk on September 17, 1968) is an American singer-songwriter. Anastacia has been highly successful in Europe, Asia, Oceania, South Africa and South America but has not had as much success in her native United States. In 2005 she was recognized for worldwide sales of over 20 million albums. Anastacia is world renowned for her edgy, soulful voice and is famous for her ability to hit powerful notes (C3 – C6/D6) in a full voice range well into soprano tessituras. Her small stature (160 cm or 5’3″) has also led to her being nicknamed “The Little Lady with The Big Voice”. She was also known for her trademark glasses (often darkly tinted), but she had surgery to correct her vision permanently in August 2005.

She made headlines when diagnosed in 2003 with breast cancer. On April 21, 2007 she married her bodyguard of three years, Wayne Newton, in Mexico.

Other concerts in Budapest