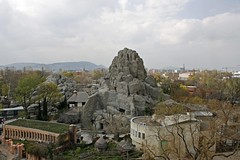 But with some attractions remaining the zoo will became an even greater hit for the families, and if it is now possible to use 2-3 hours there without a problem… what will the future bring?

By the way… do you know what can be seen on the picture on the right? That is the “Great Rock” from the Budapest Zoo, an artifical rock, around 100 years old!