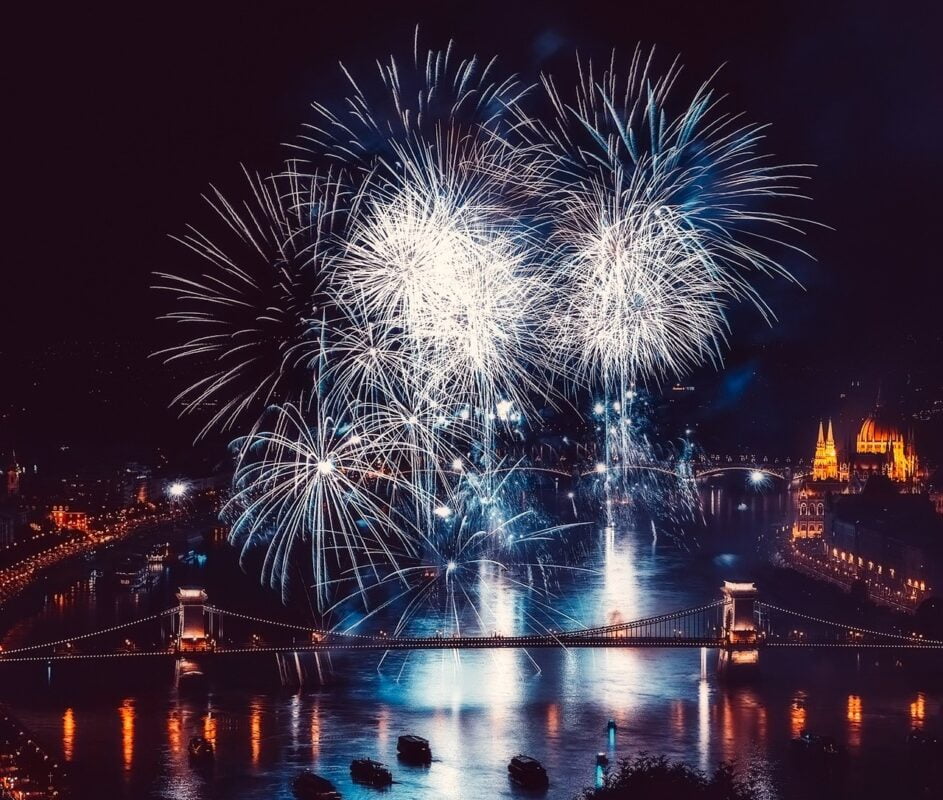 On August 20th, the Hungarians celebrate the name day of their first king, King Stephen. This is one of three national holidays in Hungary, but the only one that isn’t related to a revolution or a political riot.

August 20th is the “nicest” of the three holidays in Hungary. People are released from their jobs, and people just relax at home, go on excursions, and have a wonderful time. But, what is happening in the city of Budapest on August 20th?

The most important part of the August 20th celebration is the fireworks which last from 21.00 until 21.30. Normally, more than 1 million people enter the streets of Budapest to watch the event (along the Danube), and this is the most unifying celebration in Hungary every year.

What to do in Budapest on August 20th?

As a tourist, you will notice that stores are closed. But, most museums are open, the Szechenyi thermal bath is open, and so are most of the restaurants around town. If you want to enjoy a river cruise, there will be some differences in the timetables due to the fireworks starting at 21.00, but besides that, there isn’t much to think about.

If you need help with an airport transfer, booking of a wine dinner, or maybe some other program, contact us or look around here at hungarybudapestguide.com for more information!

August is just around the corner and if you are coming to Budapest in August, you might be wondering what’s going on and what activities and programs you should not miss for the world.

If that is you, then keep on reading. As you pack your suitcase for your trip to Budapest, make sure to bring some sun lotion, shorts and some clothes in which you can enjoy temperatures getting close to and sometimes above 35 Celsius.

Events in August
There are quite a lot of things happening in Budapest in August, and here you can read about the most important events taking place.

Sziget Fesztival
The biggest and most important event taking place in Budapest in August is the Sziget Fesztival. This is arranged at Hajogyari sziget (island), a bit to the north of the Margaret Island. This festival is visited by almost 500,000 people and more than 400 bands, groups and artists make sure the festival turns into the party of the year in Hungary.

Hungarian National Day
Hungary has three national days, but the biggest of these is St. Stephens Day which is celebrated on August 20th. This is the only national day with no political interest, so normally this is a very peaceful day with cool programs and activities. The highlight of the day is at 21.00 when there is a beautiful firework show along the Danube. More than 1,000,000 people come to the Danube to watch this show, so if you want a good place to watch the show from, make sure to arrive around 20.00. If you want to watch the fireworks from the best places available, book a room in one of the top five star hotels along the Danube, for example Marriott.

Jewish Summer Festival
This festival which celebrates the Jewish culture, music and food is arranged every year and is a very important festival in the life of the citizens in Hungary. There are quite a lot of venues in use for this festival, but the main area is in the seventh district of Budapest, near the Synagogue in Dohany street.

Handicraft Festival
The Handicraft festival, also known as the Festival of Folk Arts, is arranged in the Castle of Buda, or at least around it. At this festival you can see the finest of Hungarian handicrafts, so be prepared to see beautiful hand painted eggs, wood crafting and similar beauties. In addition you can listen to Hungarian folk music, see folklore performances and get a taste of some traditional Hungarian festival food at this festival.

Other recommended August activities
The mentioned programs and festivals might have been the most important, but there are lots of other programs worth checking out while in Budapest. A river cruise on the Danube is always a winner, and an excursion to Szentendre or some wine tasting should be done if you are not familiar with the wonderful taste and diversity existing inside the wine production of Hungary. If you want even more tips, read our article about Budapest in July which contain lots of advises valid for August as well.

These were just some tips and advises to those coming to our beautiful city in August. If you have further advises, experiences or thoughts that you believe could be interesting for people coming to Budapest, write a comment and share your insight!