Not long ago I visited La Cucina, a quite new Italian restaurant in Vaci Utca. Since the restaurant opened we have always been curious about this restaurant, as it almost looks full as we pass by walking through Vaci Utca. Therefore we were looking forward to, and excited about the chance to finally sit down and taste the food in this Italian restaurant.

The price level is like a typical Italian restaurant in a shopping street, not very expensive, and not the cheapest of its kind either. The restaurant in itself is though very cosy, and it has a very nice atmosphere. You can see the chefs as they prepare your pizza, and it is a nice place to relax after getting tired visiting to many fashion shops.

We started out with a lasagne and a ceasar salad in La Cucina, and though they were starters, we could have stopped after the starter, because they were quite big both of them. Lasagne served in restaurant often taste only tomatoes, but this was better than the average lasagne to be found around. The Ceasar salad was just the way it should be, good!

Our maincourses were a pizza and a steak. The pizza was just yet another time, just the way it should be. The steak was also very good, though if the steak was the goal, we would have eaten in Pampas Steakhouse instead.

Before the dessert we were very satisfied with our food, and well pleased with this nice Italian restaurant in the middle of Vaci Utca. For us, the highlight of the dinner was though the dessert. We ate a Chocolate Mousse and a Panna Cotta, and they were both extremely good!

Leaving La Cucina after this meal I felt as if I had found a good Italian restaurant in Vaci Utca, and I would not be afraid to return for a meal sometime if I find myself hungry while shopping in Vaci Utca in Budapest! 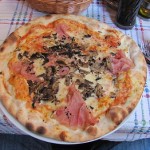