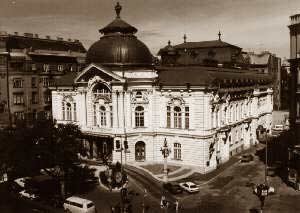 Presser has been always active in Hungarian music life. This year is the anniversary of the first show of the musical, which is one of the most outstanding works of this talented man, the Imaginary report from the American pop festival in the Víg Theatre. The musical processes the events of Altamont Festival in 1969. To celebrate, the Víg Theatre will invite you a time travelling and call up the 40 years before premier through the eyes of today youngsters. The performance will show the songs by Presser Gábor and Adamis Anna, archive records and the play by Eszenyi Enikő, director of the theatre will make more special this night. The show will be in Hungarian, so we recommend this program for those, who can understand the language or those who are very open to the Hungarian music life and culture. If you like to hear something, which has real success in Hungary for 40 years, do not miss the performance, Imaginary report from an American pop festival on 8 September 2013 at 8 o’clock PM at the Víg Theatre in Budapest. Have fun!