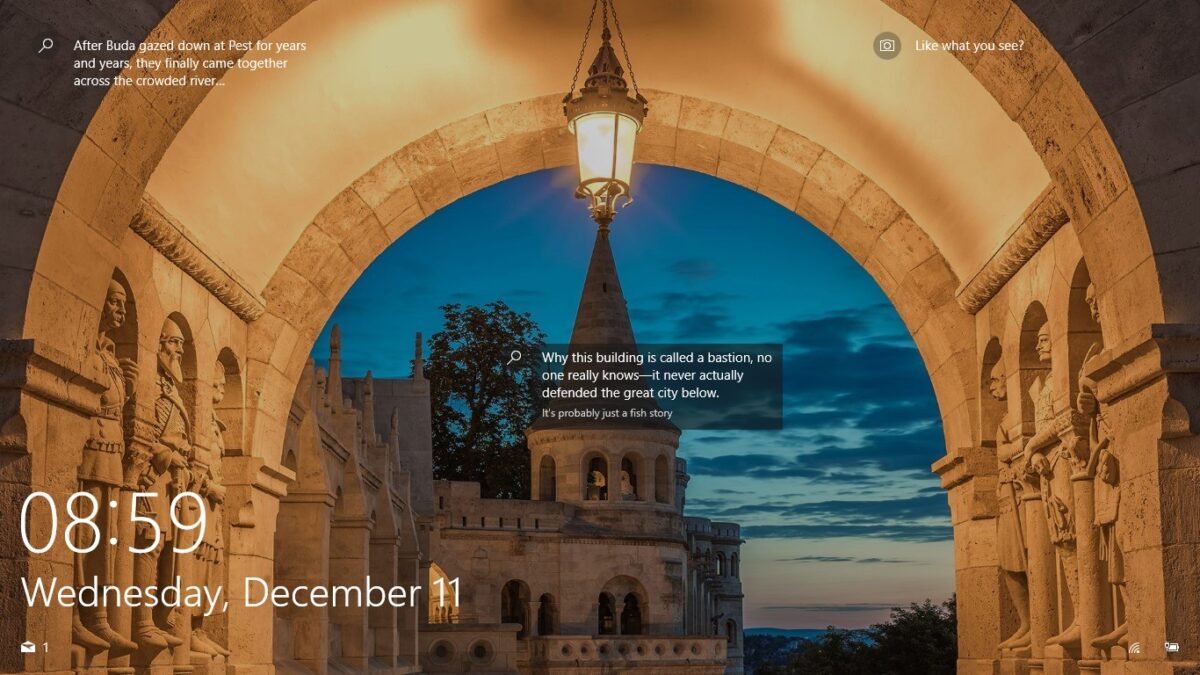 If you run a Windows computer, you might see different pictures from all across the world whenever your computer starts up. Yesterday, a picture from Budapest suddenly showed up, portraying the amazing Fishermen’s bastion.

The text in the picture says as follows:

Why this building is called a bastion, no one really knows – it never actually defended the great city below.
It’s probably just a fish story.

It is a great joy to see Budapest getting some attention from Microsoft and the world, and maybe this will attract some more visitors to Budapest.

But, what is the truth behind the Fishermen’s Bastion? Well, the name comes because of the look. It is true that is has never actually defended the city, but it was built as an attraction and was named after the fishermen who guarded that part of the wall surrounding the castle several hundred years ago.

In other words, there is no big mystery related to the actual Fishermen’s Bastion. So, come and check it out for yourself and enjoy Budapest with all its magnificent attractions, amazing food, and interesting programs.

For inspiration and ideas, look around here at www.hungarybudapestguide.com.

Would you like to get a feeling of joy every time you look at your Windows wallpaper? Maybe get a feeling of love, longing or beauty? Then check out these three beautiful Budapest wallpapers which we offer you totally for free, all you need to do is to share this page on Facebook, Google+ or on Twitter.

If you share this page you will get to see small versions of the beautiful wallpapers together with their download links. So you can then simply download all three wallpapers, or if you have one favorite, download that one and add it as your Windows wallpaper. We can guarantee you that it will spice up your Windows background, especially if you are still going with the boring Windows default wallpapers. To change your background in Windows 7, follow these instructions.

By clicking the pictures you will be sent to the full size version which you can save to your computer. The easiest way of setting a pictures as your Windows desktop background is to right click the full resolution size version of the picture and press “Set As Desktop Background.” [/sociallocker]

These background, Windows wallpapers, are of high quality, but not fantastic quality, meaning that if you have a desktop resolution higher than 1280*768, they might look a bit blurry. But, hopefully you will be able to enjoy them anyway!