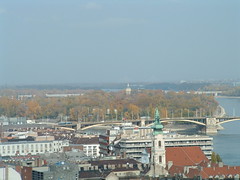 This picture was made a couple of weeks ago, and here you can see three bridges. The first one is the Margaret Bridge, followed by the Margaret Island. Then comes the Arpad Bridge, and then comes the newcomer, the Megyeri Bridge. To see it you need to open the picture in big resolution (press the picture to do so), and then you can see in the background of the picture the Megyeri bridge, trying to lead people around Budapest without having to enter the inner city.

It has always been so that if you want to go from east to west or south to north in Hungary, you have to drive through the center of Budapest. To change this (which we would all be happy about) they are trying to build a new highway called the M0 that will lead the traffic around Budapest instead of into Budapest. We are still not completely there, but we are getting closer!