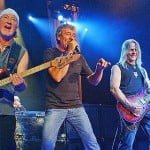 We have great news for classic rock music fans, because the popular band Deep Purple will give a concert at one of the biggest stadium in the Hungarian capital, the Papp László Budapest Sport Arena at 17 February 2014!

The Deep Purple formed in 1968 in United Kingdom, but they had an almost 10 year break from 1976. They re-formed in 1984 and they are still very successful. The members are Ian Gillan singer, Steve Morse guitarist, Roger Glover bass guitar player, Don Airey pianist and Ian Paice drummer. During their career, they sold 100 million albums in worldwide, and they was added to Guinness World Record Book as the loudest rock band. Fortunately the Deep Purple relatively often visits Hungary, they have been here 10 times since 1987, and the last occasion was last summer at Fezen Festival. Their concert in February is going to be the 11th time when they welcome their friends on Hungarian stage, and it could be a great occasion for you too, to see the probably best concert in 2014 in Budapest.

The extra in this Deep Purple concert is, the band what will play before the legends is an emerging Hungarian rock and roll band, the Ivan and the Parazol! If you like the hot rock music, what brings you back to the atmosphere of 60s and 70s, you won’t be disappointed. Moreover Parazol’s songs are in English, so you wouldn’t worry about language differences either.
Do not miss Deep Purple at 17 February in Budapest, because it will be unforgettable!

For tickets and more information, visit the Budapest Events Calendar