Skip to content
Budapest Guide > What’s on? > Blog > Gourmet Festival in Budapest in 2015 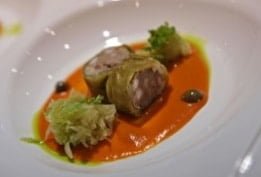 At the Gourmet Festival visitors can choose from more than 100 restaurants including Borkonyha which is a French styled bistro which offers the best Hungarian dishes and has also a wide selection of wines, Cake Shop which sells the best handmade sweets, desserts, creams, pies and cakes in Budapest, DiVino Wine Bar which is one of the most popular places in Budapest which presents a wide selection of the best products of the young wine maker generations and Gerbeaud Coffeehouse which is definitely one of the most famous sweet spot in the centre of the city, Gerbeaud offers the most delicious traditional cakes. Unfortunately the programs of the Gourmet Festival 2015 have not been announced yet.

The Gourmet Festival will take place from the 21st May 2015 to 24th May 2015 at Millenáris Park in the heart of Budapest. Tickets for the festival are already available.

For more information on events and happenings in Budapest, check the following site.