If you visit the Museum of Fine Arts before 7 April, you can in addition to the permanent exhibitions see the Honoré Daumier temporary exhibition with the artist’s graphic collections. The title of the exhibition is: “The way you live.” 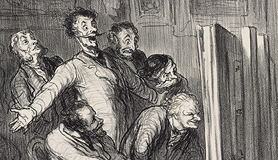 The museum’s collection includes Daumier earliest pages, political cartoons from the 1830s, which were made for Charles Philipon’s order, and they were published in two sarcastic newspapers, the La Carucature and the Le Charivari. The main target was the “pear-head” Louise Philippe citizen king, but the artist made ridicule about the politicians and delegates who served the king. His mostly known cartoons were made to protect the freedom of press and speech. His older works can be seen too, which shows the caricature of citizen’s weekdays and habits in Paris. The exhibition shows other artists’ works (Beaumont, Cham, Gavarni, Canzi) on 170 pages who were inspired by Daumier.

Daumier was one of the most excellent artists of his time, who had good monitoring capabilities, which helped him to draw the perfect French lowbrow with all the mistakes and oddities. He characterized people in a short and sharp way. He saw the funny side of everything what surrounded him, and his drawings are the masterpieces of the characterizations of humans. The success came late for him, but he was already well-known before his death, and people loved his works, not just his colleagues, but costumers too.

If you are a fan of fine art or interested in the French humor from the 19th century, don’t miss this exhibition in the Museum of Fine Arts.