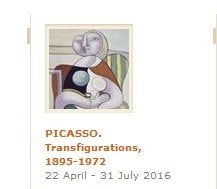 Want to take a look at the biggest Picasso exhibition on display in Hungary ever? Visit the National Gallery before July 31st.

The Museum of Fine Arts and the National Gallery are hosting this Picasso exhibition together, cooperating first of all with the Picasso museum in Paris. The exhibition opened on April 22nd and will be available until the last day of July. Here is some more information about the exhibition from the press release:

“Boasting a hundred paintings, drawings, sculptures and other artworks, this exhibition embraces every period of Picasso’s career, paying particular attention to one aspect of his ouvre: the constant transfigurations in his portrayal of the human figure. Most of the exhibited works have been generouslyloaned by the Musée national Picasso-Paris, which, with some 5000 works, preserves the largest Picasso collection in the world. The collection was bequeathed to the French state by the artist’s heirs, and contains works from every period of his activity, as well as 200,000 documents – letters, periodicals and photographs – from Picasso’s private archive.

The vast majority of the artworks on show – 74 in all – have come from the collection of the Musée national Picasso-Paris. These are supplemented by selected masterpieces kindly loaned by other major, global museums: The Israel Museum of Jerusalem, the Beyeler Foundation of Basel, the Kunstmuseum Bern, the Pushkin Museum of Moscow and the Staatsgalerie Stuttgart. Visitors can also see three paintings from the Ludwig Museum of Budapest, and an exquisite selection of etchings from the Collection of Prints and Drawings at the Museum of Fine Arts, Budapest.” (source)

This is a nice way to take a break if you are tired of watching the Euro 2016 matches in June and July, or if you are in town and watch all the matches outside on the Szabadsag square, but have some spare time in the middle of the day before all the matches start again in the evening.