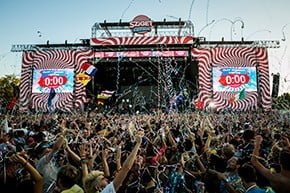 Sziget Festival is one of the most popular festivals in Hungary although during the summer Hungary has plenty other festivals to choose from such as Volt Festival, Balaton Sound and so on.

Every year the festival opens it gates for the visitors in the capital of Hungary in Budapest. The festival takes place on an island called Hajógyári-sziget in Budapest in every August since 1993. The festival like in every year so far will be held in 2015 from 10th August to 17th August. The festival offers a wide range of various programs and concerts from different artists and musicians from all over the world. The festival popularity grows every year and it attracts thousands of people from the four corner of the world. The programs and concerts are not announced in 2015 yet but Sziget always has the most popular and unique musicians and singers. Last year’s most popular performers were Prodigy, Macklemore & Ryan, Placebo, Outkast, Calvin Harris, Skrillex, Lily Allen, Deadmau5, Korn, Blink-182, Bastille, La Roux and so on. There are also different tickets you can buy from the different daily passes to the weakly passes.

If you want to be part of one of the biggest and most popular festivals in Europe then you can not miss Sziget Festival in Budapest. If you want to know more about the festival and find other useful information, visit our page dedicated to the Sziget festival.

For more information on other things happening in Budapest, check this site!

One thought on “Sziget Festival 2015”