Skip to content
Budapest Guide > All you can eat 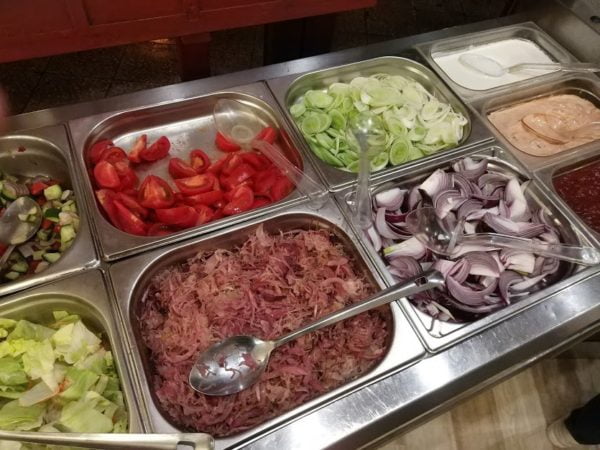 While there are six different Trofea Grill restaurants in Budapest, there is only one Mongolian Barbecue, and it is located on the Buda side, not far from the Deli Railway station and the Mom Park. It is cheaper than Trofea Grill by 15-20%, making it more attractive for those on a budget. But, is it worth saving money by visiting this restaurant instead?

After visiting Trofea Grill several times, the first impression of the Mongolian Barbecue is that it looks a bit more old-fashioned and tired. The interior isn’t as shiny and modern as Trofea Grill. But, who cares about the interior if the food is fantastic?

The food in the Mongolian Barbecue

In the restaurant, you can eat and drink unlimited for a set price. The starters have to be ordered from the waiter (included in the price of course), and it will be served at the table. When you are ready to eat some meat, you have to leave the table and grab whatever you want to eat by yourself. You later hand this over to the chef who prepares it in front of you. There are quite a lot of salads and other side-dishes available, in addition to the meat!

I have nothing to complain about when it comes to the meat, nor the side-dishes. But, it is impossible to visit this restaurant without comparing it to Trofea Grill. And if I do so, I miss the finished dishes, meaning those dishes already prepared which you can eat without grilling it. But, after all, this is a barbecue restaurant, so it shouldn’t be expected… but again, Trofea Grill is the problem!

As you finish eating, you are probably interested in having some dessert. Here you get to pick from the menu again, but unfortunately, the desserts were disappointing to us. There were four to choose from, and neither of them gave us a big “kick”.

All in all about the Mongolian Barbecue

The price level of the restaurant varies between 12-17 Euro per person. Considering the fact that you can eat and drink as much as you want, the price is really nice. But, if you compare it to Trofea Grill, I would rather visit the latter, simply because of the much nicer look on the interior, and most importantly, a much wider selection of starters, main courses, and also desserts.

Have you been to the Mongolian Barbecue in Marvany utca in Budapest? How did you like it?