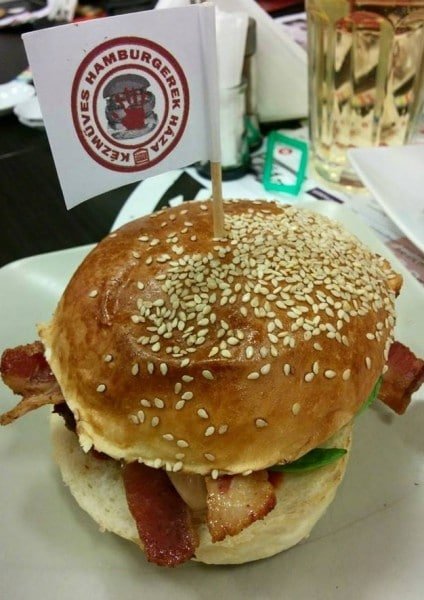 Would you like to eat a tasty burger in Budapest, but in your mind McDonalds and Burger King is everything else than tasty hamburgers? Why not visit the Burger House located next to Nyugati square, just somewhere between the WestEnd Citycenter and Sir Lancelot.

I visited Burger House not long ago to grab a hamburger with my family. We ordered quite a lot of different burgers, and for some reason making the order and getting it right seemed to be very hard, so the waiter came back several times to fix the order. After quite some waiting we manage to get almost what we ordered, but those who got what they ordered were really satisfied and the taste of the burgers was for sure among the best in Budapest. What was a nice plus was that the chef preparing the burgers noticed that we had a pregnant person in the group, and automatically he prepared the burger so that even the pregnant lady could eat it without fearing meat that has not been well enough prepared.

All in all we were not completely satisfied with the overall experience because of the mess making the order and so on, but the food that we were served was great, so we would have no problem returning to Burger House in Budapest another time to grab some more burgers.

[stbpro id=”info”]There are several other Burger House restaurants in Budapest. You can also find one in Lurdy Haz, in Duna Plaza and in Óbuda. But the one near Nyugati is for sure the one with the best location.[/stbpro]