Skip to content
Budapest Guide > What’s on? > Blog > A fantastic tram-ride in Budapest 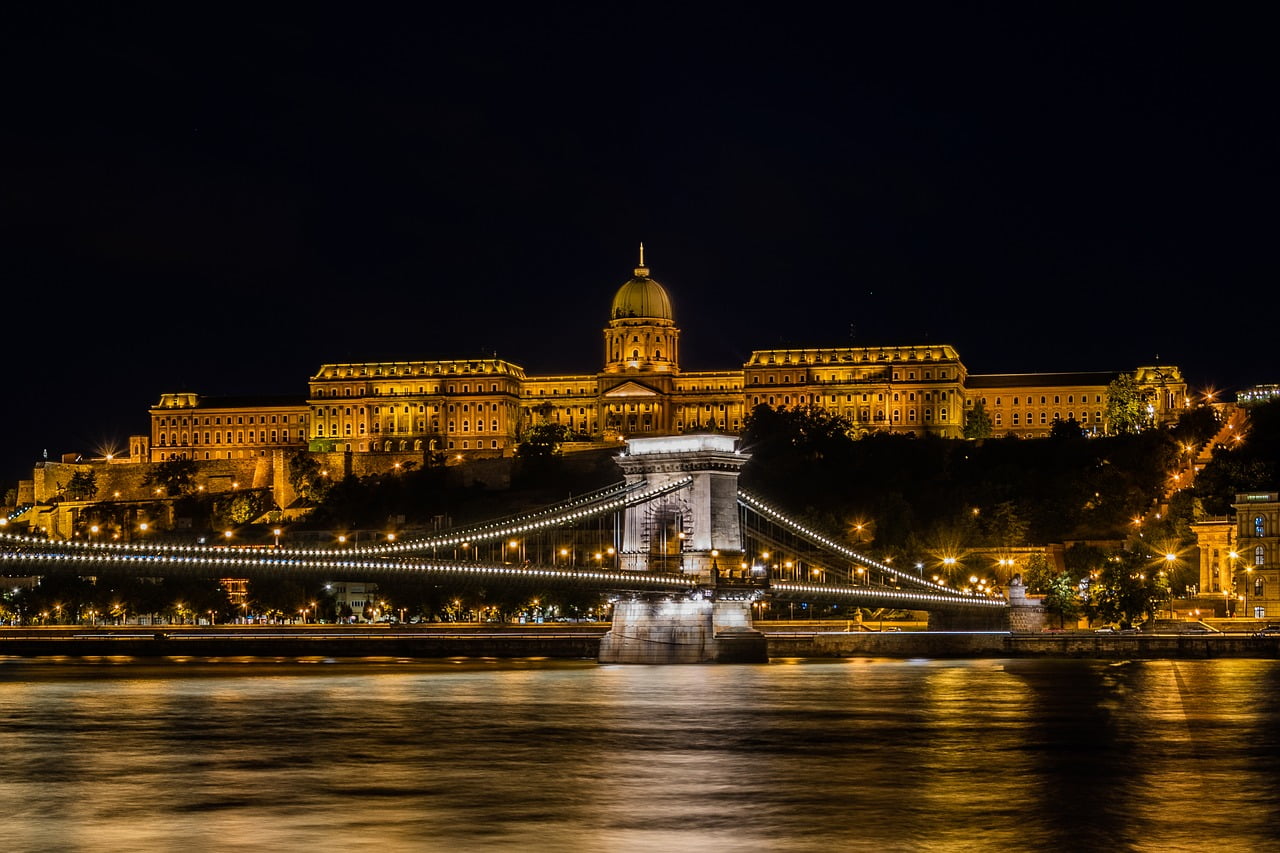 You can buy tickets to hop-on-hop-off buses in Budapest. You can pay a private guide to show you around. Or, you can buy a single ticket for the public transportation and enjoy a ride with tram 2 in Budapest.

Let us get started right away. The best way to start the tour is by heading for the Margaret Bridge. The bridge is located a bit north of the Hungarian Parliament. You can, of course, start by jumping on the tram from the Rakoczi Bridge (or the Petöfi Bridge, or the Liberty bridge instead), but as you join us on this trip, we will start from the Margaret Bridge (name of the stop is Jaszai Mari tér).

Let’s get started with the panoramic tram ride in Budapest

As you board tram line 2 in Budapest, do not forget to validate your ticket first. The people inspecting tickets are not known to be tourist-friendly. As a consequence, lots of people have ended up paying unnecessary fines, even if they didn’t intend to do anything wrong at all. Again, validate your ticket. You can not buy a ticket on the tram, so you need to bring a ticket with you (you can buy from vending machines, from small kiosks, and in all metro stations).

You do not need to travel for a long time with tram 2 before you see this magnificent building ahead of you! The Hungarian Parliament is the building, and it is one of the most beautiful of them all in Budapest.

Depending on who tells you about the building, you will hear that it was constructed sometime between 1884 and 1903, and it was designed by Imre Steindl. It is very inspired by the British Parliament building, but it ended up even nicer than its source of inspiration!

There has been a lot of construction work on the Hungarian Parliament building, but it is now mostly finished. As a result, it is shining on all sides (earlier it has been almost black due to dirt). The building is fantastic all times of the day, but it is at its most amazing after sunset with the big lights turned on!

As the tram drives next to the Parliament you will see two other beautiful buildings. These were all part of a design competition at the end of the 19th century, but they both lost the competition to the present Parliament building. Instead of throwing away the drawings, they decided to build both the buildings as well. The first building you see is the home of the Ethnographic museum while the second building belongs to the Ministry of Agriculture.

Once you leave the Parliament and the other buildings behind you, the tram will take you along the River Danube again. You will be met by a stunning view in all directions as the tram moves on towards the Chain Bridge, the most famous of all bridges in Budapest. But, before we pass by the Chain Bridge, let us take a look across the Danube to enjoy the view of several beauties.

A nice Danube Panorama to the right

As we look to the right we will see four different structures that should be highlighted. Take a look at the picture beneath to see which those buildings are.

Down by the Danube on the Buda side you can see the Szilágyi Dezső Square Reformed Church. It was built between 1893 and 1895, and it is well known for its special shape, and the beautiful Zsolnay tiles on the roof.

As you look further up you can see three interesting structures next to one another. The one marked as number two on the picture is the Fishermen’s Bastion. This was built at the start of the 20th century, designed by the Miklos Ybl. While working on the Fishermen’s Bastion, he was also leading the work of renovating the Matthias Church (number 3), a church that was originally built in the 13th century. This church is the favorite church of many who visit Budapest, not only because of its interior, but because of the fantastic Zsolnay tiles on the roof, and that you can visit the tower and enjoy one of the best views in Budapest from the top.

Number four on the picture is the Hilton Hotel. This is a debated building, as many feel as if it shouldn’t be there. It is, however, a very special building due to the fact that it was constructed onto the remains of a Dominican monastery from the 15th century. As you enter the hotel, you can still see the ruins of the original building, making this one of the most special Hilton hotels in the world.

The beautiful Chain Bridge and the Castle

The tram ride from the Parliament to the Chain Bridge doesn’t take more than 1-2 minutes, so you will not have a long time to study the buildings we have just described. Soon you will get into a little tunnel taking you to the other side of the Chain Bridge. But, do not forget to take a closer look at the bridge before you drive beneath it. This was the first permanent bridge constructed between Buda and Pest. It was finished in 1849, and it has been one of the most famous landmarks in Budapest ever since. It was destroyed in 1945 (Second World War), but was quickly fixed and was ready for use again in 1949.

Now it is time to look to the Buda side again. On the top of the hill on the other side, you can see the Buda Castle. It was originally constructed in the 13th century. It has served several kings and flourished especially during the reign of King Matthias in the 15th century. During the Second World War, it was heavily damaged, but most of the damages were fixed during the Communist reign. Today the Castle is the home of the National Gallery, Budapest Historical Museum, and the National Library. In addition, it is a very popular venue for festivals and other popular events.

The Elisabeth Bridge and the Gellert Hill

In front of us, we can now see a white bridge, better known as the Elisabeth bridge. It was originally constructed in 1903, and it was the largest suspension bridge in the world as it was finished.  Just like the Chain Bridge, it was destroyed during the Second World War. The citizens of Budapest had to wait for more than 20 years for this bridge to be reconstructed.

On the Buda side of the bridge, we can see a statue portraying Bishop Gellert. He was on his way to Jerusalem as a pilgrim in the 11th century, when Hungary’s first king (Stephan), convinced him to stay. Gellert stayed in Hungary, but after the death of King Stephen, he was taken captive by rebellions trying to get rid of Christianity, and he was thrown down the hill in a barrel (and died).

On the top of the hill, you can see the Citadel and the liberty statue. This hill has been used for thousands of years, but the citadel (fortress) was built between 1850-1854. The statue portraying a lady with a palm branch in her hands was built after the Second World War in honor of the Communist soldiers who liberated Budapest (the construction was ordered by the Soviets, so the Hungarian didn’t have the chance of saying no to the job). The Gellert Hill is maybe the nicest place in Budapest if you want to take stunning panorama shots of the city, both during daytime and by night.

You will now quickly reach the green bridge, the Liberty Bridge. This was the third bridge built between Buda and Pest and it was finished by the end of the 19th century. Since the tram will drive into a tunnel to get beneath the bridge you cannot actually see the building, but on the Pest side next to the tram line, you can now find the famous Market Hall, a must-see place while in Budapest.

As the tram moves on, you can see the Gellert hotel on the Buda side, and almost next to it, the Technical University. But, just as interesting is the building on the Pest side built in the shape of a whale. This is often referred to by locals as the whale (Bálna), and it is a cultural center with some nice shops, and several restaurants and bars. It is a nice place to sit down and have something to eat and drink while enjoying the view of the Danube and the city.

The end of the tram ride is approaching, but there are still a few more things worth noticing. First, we will pass beneath the Petőfi bridge (named after a famous Hungarian poet who lived in the 19th century). On the Pest side, you can now see a whole lot of newly built buildings. It is a modern area with new flats and quite a lot of offices. But, do not be fooled, and do not leave the tram yet. You will soon reach the final stop, and Budapest has some goodies left for you, just take a look at the picture.

As the tram ride ends, you will end up next to the Palace of Arts (to the right) and the National Theater (to the left). These are some magnificent buildings that were built quite recently (between 2000 and 2005). They are extraordinary buildings, but most people would say that they are most impressive by night, just look at the picture above again.

Now that the tram ride has ended

The tram ride has now ended, and you have just enjoyed a very cheap panoramic tour of Budapest. But, you are far away from the city center by now, so you should probably just remain on the tram and enjoy the ride back to the city center. You will then have one more chance to pick up on those attractions you didn’t really have the time to see during the first ride.

Do not forget that this is a ride you should do both during daytime and nighttime. As you can see, lots of the pictures are portraying Budapest by night, and the city is even more beautiful then. If you want to save even more money, you could do this tram ride instead of a River Cruise on the Danube. Most cruises travel between the Margaret Bridge (where the tram ride started) and the Rakoczi Bridge (where the tram trip ended), so you will see exactly the same. It might be better and easier to spot everything from the Danube, but if you are on a budget, this is a fantastic tram ride that will let you discover Budapest on your own without spending more than 1 Euro.

Doesn’t this sound like a treat when you come to Budapest? Have you tried it? Have you got any questions? We would love to hear your comments, thoughts, and questions.

4 thoughts on “A fantastic tram-ride in Budapest”