Skip to content
Budapest Guide > What’s on? > Blog > A visit to La Pampa in Budapest 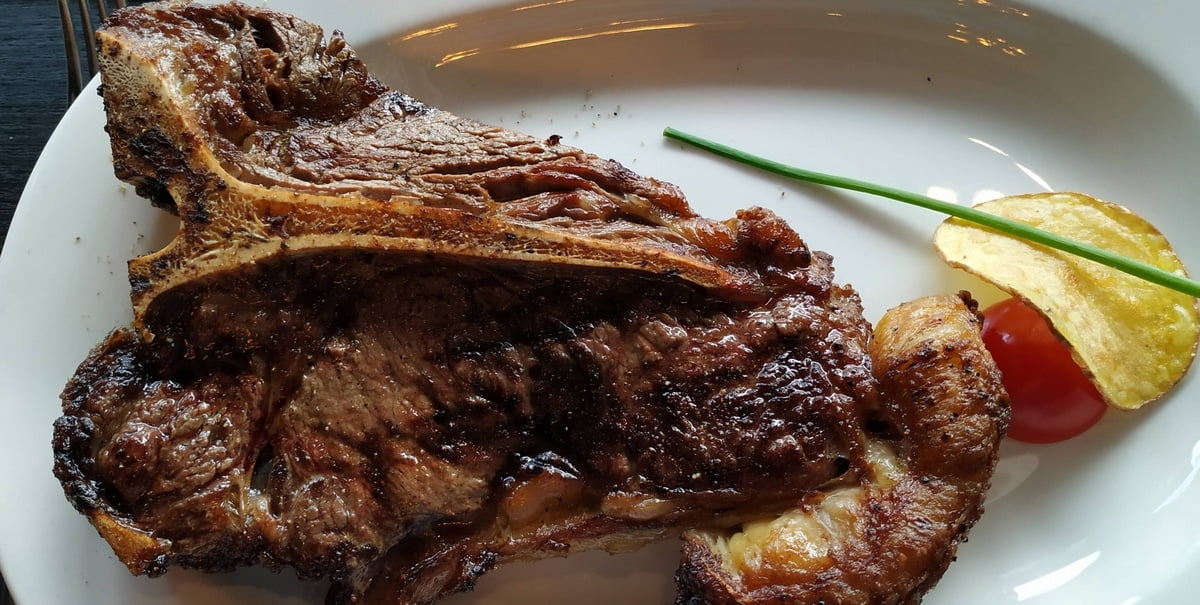 Last week, we had the chance to enjoy a magnificent dinner in La Pampa Budapest. We hadn’t been to the restaurants since its opening almost 10 years ago, and discovering that they recently moved into a new location made us want to pay the restaurant a visit again. So, what was La Pampa like? Is La Pampa worth a visit?

If you do not know anything about La Pampa, let us first introduce it to you as a steakhouse in central Budapest. It can be found along a busy road (though you do not notice that at all once you are on the inside), and very close to the metro station Arany Janos utca. This is one of the most elegant restaurants in Budapest as it has a very nice interior, and it is perfect for an important business meeting, just as well as a nice dinner for a group of friends, or for a group of men who wants to see who can eat a 550 gram steak in the shortest amount of time.

What we ate in La Pampa

During our meal in La Pampa, we decided to start slowly with a Carpaccio de Lomo. This is “finely cut Angus steak drizzled with a chimichurri sauce .” I have got to say that it was really tasty and nice, and especially the Hungarian pepper (paprika) combined with the rocket salad was delicious.

But, I almost forget, after placing your order you are always served a mild starter, a fresh piece of bread with some spicy butter, freshened up with some tomatoes. In some restaurants, this is freezing cold and impossible to apply to the bread, but here it wasn’t only soft, it was very tasty and nice as well.

When it was time for the main course to come, we ate a T-Bone steak and a normal rump-steak. The meat was very nicely prepared, and especially the tenderness of the T-Bone steak was amazing. No wonder why people long to eat such steaks during a visit to a steakhouse like La Pampa.

In addition to the steaks, we also had some green pepper sauce, some onion rings, and some potato croquette. These are favorites of ours, and we loved them. One thing that has changed since the last time we visited La Pampa, is that they have changed the onion rings, making them even better, crispier, and tastier than they were before.

Just like in other steakhouses, you can ask to have your steak prepared in the way you prefer. In the end, a small cow is placed on your stake to show you the preparation level. This is a cool little thing that especially children find to be funny as they can play with the small cows before/while/after eating!

The desserts in La Pampa are easy to like, and the prices are all around 3-4 Euro. In other words, it is easy to finish your meal with a brownie, a Creme Brulé, or maybe with a chocolate souffle with mint taste? We tasted the latter, and it was like eating After Eight. In other words, a perfect treat for those who like the combination of chocolate and mint.

The interior of La Pampa

There is no chance to sit outside as you visit La Pampa, but they do have some very nice tables by the windows which will give you a nice view towards the street and what’s going on out there. But, La Pampa also has some magnificent rooms with space for individual guests or larger groups, giving the restaurant a total capacity for around 160 guests. But, do not forget to reserve your table in La Pampa as it often ends up completely packed during the evenings.

Should you visit La Pampa?

La Pampa is a very nice restaurant with high quality food, well-skilled waiters, and a very nice interior. It is good pick for a nicer dinner on any evening, and it can also be used for groups who want to eat a dinner together in a private room with space for 40-50 people, or just someone at a stag-party who want to eat a solid beef before the party goes on.

The price level is just what one would expect in a steakhouse. The starters vary in price between 5 and 10 Euro, while the main courses vary between 10 and 60 Euro. The desserts all cost around 4-5 Euro.

We had a great time in La Pampa and it is a restaurant that we can warmly recommend if you want to dine in a similar way when you come to Budapest!