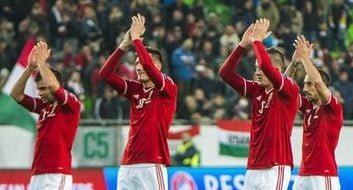 Yesterday at exactly 22.40 shouts of joy could be heard from thousands of Hungarian homes and from more than 20,000 people present at the Groupama Arena. The Norwegian fans had already left the field, but the Hungarian players and the crowd remained at the stadium for a long time celebrating their qualification to a world tournament for the first time in 30 years.

This must be looked upon as a great moment in Hungarian football history, because after decades with little to nothing to rejoice in, not on club level and not on the level of national football, the Hungarian team finally managed to qualify for a bigger tournament, meaning that in the summer of 2016 the Hungarian team will travel to France to partake in the European Championship.

The Norwegian team came to Hungary as favorites before the match, even if they lost 1-0 to Hungary in Oslo three days earlier, but starting the match with a dream goal by Priskin Tamas the Hungarians in fact seem to have full control on the match all the way, while the Norwegian guys looked weak and with no guts in them at all. Quite the opposite of the fighting spirit found in the Hungarian players, something that could be seen very clearly as Daniel Bode wrestled with a Norwegian defender after 80 minutes. No need for the wrestling at all, but he still showed that he was on the field to fight!

In other words, we look very much forward to the European Championship in France in 2016 and this will be an event that for sure will give a big boost to Hungarian football, encourage young talents to go for it and follow their dreams, and who knows… maybe the Hungarian team will manage to fight themselves to some victories even in the Euro 2016?