The first impression arriving makes me ask myself a question; is this really the place? It looks so nothing special (see picture below). We sit down, order a starter and a pizza and two bottles of Pepsi. The starter was nice, the pizza was good, but nothing super special, making it better than everywhere else in Budapest. In the end we wanted to order a dessert, but unfortunately almost all desserts were sold out, so we ended up buying some Italian cottage cheese dessert inside some biscuit with chocolate around. We got it at once, so guess they just took it out of the fridge. It was okay in taste, but nothing we would order again.

If you are a on a budget though this restaurant is a quite good one. For two bottles of Pepsi, a starter, a pizza and a dessert the final price was around 3800 HUF. 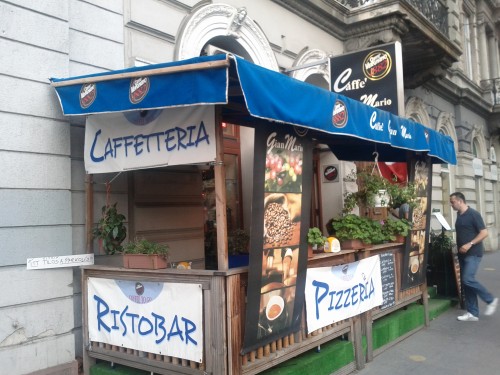