Skip to content
Budapest Guide > What’s on? > Blog > Change in taxi prices from Budapest Airport (and in the rest of Budapet)

There are lots of changes taking place in the taxi business in Budapest. The most visible change is that more and more taxis are turning yellow. Another change is that fares are going up.

Until now visitors coming to Budapest just jumping in a taxi at the airport would get a set fee based on what area of the city they were going to, at least if they used the official Airport Taxi company named Fő Taxi. Due to the changes this has now changed, and you will not be able to know the price of your ride to your Budapest hotel before you actually arrive, because how much you pay is based on the length of your ride in kilometer and in time. The fee you pay per kilometer and the initial fee for just jumping into a taxi has also been raised. The new initial fee is 450 HUF and the new kilometer fee is 280 HUF. 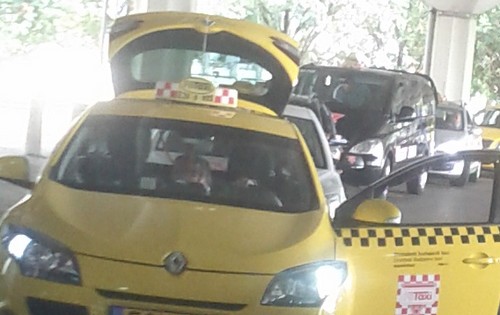 For you as a tourist this means that traveling with taxies in Budapest has gotten more expensive, but do not be afraid, it is still cheap (if you are not tricked). As you come to Budapest Airport your taxi towards the city center has also gotten more expensive, maybe with 1500-2000 HUF compared to earlier. This means again that our fares for prebooked and private airport transfers cost exactly the same as if you just jump into a taxi at the airport, however you will know the price beforehand and you do not have to fear that you are being tricked by a driver taking slow roads, standing in lines on purpose and so on.