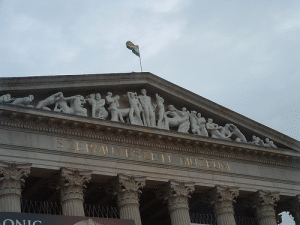 The Museum of Fine Arts in Budapest will be closed temporarily from the middle of February 2015 due to the renovations of the museum.

The museum will be closed from 15th February in 2015 and the reconstruction works will supposedly last three years, but in theory they plan to reopen the museum again in the summer of 2017. At the moment the Museum of Fine Arts only show three exhibitions to its visitors which includes the exhibition on Rembrandt which presents the most beautiful works of the artist.

The Museum of Fine Arts is located at Város Liget (City Park) in Budapest which is one of the largest green areas of the city. The City Park gives home to several attractions such as the zoo, the Szèchenyi bath or the Museum of Fine Arts. The Museum of Fine Arts is located just at the Hero Square which is one of the most famous spots in the city. The museum is a neo-Renaissance and neo-Classicist building which opened its gates the first time in 1906. The museum has a wide range of collections of the most outstanding artists including Rembrandt, Raffaello, Leonardo, Monet, Goya and Dürer so do not forget to check the museum out before it closes and keep it mind the next time in the summer of 2017 will be open again.