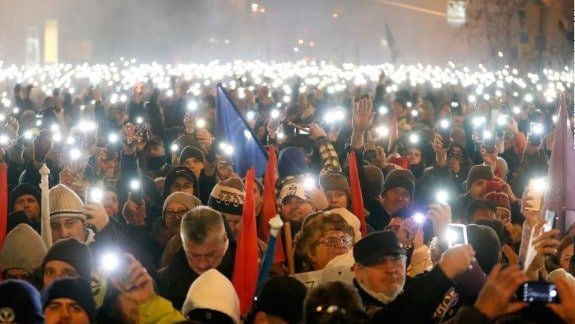 Are you coming to Budapest in the coming days, or maybe you are here already, and now you are worried after reading and hearing about violent demonstrations in Budapest the last days? So, what is the truth? What is it all about? And will you be in danger as a tourist?

First of all, the demonstrations are against the current Prime Minister and his rule, and first of all because of some new rules that were introduced last Wednesday. On that day, the Parliament voted for the so-called “Slave Law”, raising the number of over-time hours from 250 to 400 possible hours for workers. Some call this a great opportunity to work more and earn more, while most people believe this will be abused by employers to drive their workers even harder.

Are the demonstrations dangerous for tourists?

The short answer is NO. The longer answer is NO, not at all! If you ever  someone demonstration, you can simply go another way. Or, you can decide to go with them. We have personal knowledge of people attending the demonstrations, and these are peaceful people who long for a change in the nation. There are some “crazy” people attending the demonstrations, but they are not really welcome, and if they turn a garbage can over, the people coming after normally place the garbage can back up in order.

In other words, if you are curious, take a look at what’s going on from a distance, and if you want to support them, walk with them. But, if you feel as if things get heated up, rather leave the area and eat some Goulash soup instead!

The ugly truth about the state of Hungary

We are really in love with the city of Budapest, but it doesn’t mean that we enjoy and appreciate everything that the politicans say and do. And it feels terrible when you hear that people are afraid to say their name to writers and to share their opinions on Facebook. Why? They are afraid of losing their jobs and fear their future. People are threatened to shut up, or they will lose their jobs! If you show up on demonstrations, the chances of being investigated for money matters or other stuff, increases a lot!

Even more annoying is how the state media is compromised, and thus, the larger part of the Hungarian population do not even know about the demonstrations. The State TV is saying whatever they want, and normally all they say about the demonstrations is that George Soros has financed them, and that those showing up are bullies who only want to destroy and create trouble. There are a few credible and objective sources for information, but those are really few, and thus, the average Hungarian will only see the filtered news served them by the Hungarian government.

In other words, there are plenty of reasons to demonstrate – but as a tourist, you do not have to worry at all about.