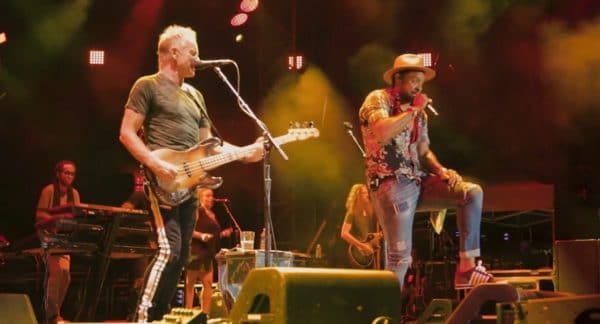 Will you be in Budapest on November 24th? Are you a fan of Sting, Shaggy, or maybe Punnany Massif? If you haven’t ordered your plane tickets to Budapest yet, hurry up! It will be worth it!

The concert with Sting and Shaggy (with Punnany Massif joining in as a warm-up band) will be arranged at the Heroes Square in Budapest on November 24th. It will start at 18.00, and it will be a completely free event. The occasion for the event is the 30-year anniversary of the most popular kind of lotto in Hungary. But, who cares why it is arranged and who is arranging it – this is your chance to listen to Sting, Shaggy and Punnany Massif for free in Budapest on November 24th.

And, when you first visit Budapest, make sure to visit the fantastic Christmas markets in town, and since you do not have to spend money on the actual concert – spend your money on a romantic river cruise, a delicious wine dinner, or maybe a rustic brewery visit instead? You can read more about all these and other programs here in our Budapest Guide.

Do not forget to share this article on social media to let all fans of these artists around the world get the chance to listen to them all for free!

Ps: Do not try to approach the concert area with a car. There will be roadblocks everywhere, so park your car far away and approach the area on foot or using public transportation!

The English artist Sting was born in 1951, which means that he will turn 60 years old in 2011. But, Sting is still going strong, and I guess everyone who comes to his Budapest concert will see and hear that.

The Sting concert will be arranged in Budapest Sportarena on June 30th, starting at 20.00.

More about Sting (source: Wikipedia)
Gordon Matthew Thomas Sumner, better known by his professional name of Sting, is an English musician, singer-songwriter, activist, actor and philanthropist. Prior to starting his solo career, he was the principal songwriter, lead singer and bassist of the rock band “The Police”.

Sting has varied his musical style throughout his career, incorporating distinct elements of jazz, reggae, classical, new age, and worldbeat into his music. He has as a solo musician and member of The Police, Sting has received sixteen Grammy Awards for his work, receiving his first Grammy for Best Rock Instrumental Performance in 1981, and an Oscar nomination for the best song. He is a member of the Rock and Roll Hall of Fame and the Songwriters Hall of Fame.

Within the next seven days there will be quite some spectacular concerts in Budapest. It all starts tomorrow with a gospel kind of concert in Budapest Sportarena. Here the crowd will be able to hear the famous worship band from Hillsong London and also London Community Choir.

The highlights of the week will though be on Saturday and Sunday for most people. On Saturday Sting will enter the Stage in Budapest Sportarena, followed by the crazy Lady Gaga on Sunday. There are big expectations connected to this concert, as Lady Gaga has been praised for the quality of her concert as she is touring Europe.

For those staying in Budapest until Monday Joe Satriani will have a concert, so there should be something to enjoy for all kinds of music tastes within the next seven days in Budapest.

We wish everyone a beautiful week in Budapest!

Sting is an amazing artist, he has been to Budapest before, and now he is coming back to amaze his fans in Hungary. If you would like to be there, it is worth knowing that the concert will take place in Papp Laszlo Budapest Sportarena, November 6th. The event is supposed to start at 20.00, and tickets can be ordered using the link below.

If you would like to have some fun, maybe do a winetasting while in Budapest, check out our winetasting page!