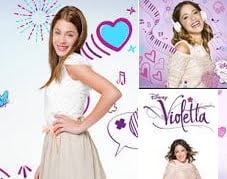 Violetta is a kids oriented television program on Disney Channel and all the main characters of the Disney television series will be in the live show in Budapest. The main characters in the series are Martina Stoessel as Violetta Castillo who has a bright and joyful personality and also has a great voice, Pablo Espinosa as Tomàs Heredia who is an attractive, confident but simple guy in the series, Jorge Blanco as León who is a little bit arrogant but despite this he has a warm and good heart, Mercedes Lambre as Ludmila Ferro who is the diva of the group and Clara Alonso as Àngeles who is really charismatic and a cheerful person to be with. The television series shows the life of the teenage Martina Stoessel.

Martina and her friends will give the best family friendly show in Budapest and they will also perform all the hit songs of the three seasons.

The Violetta Live Concert will be held in Budapest on the 29th August in 2015. The concert will take place at Papp László Sportarèna. Tickets for the show are already available.