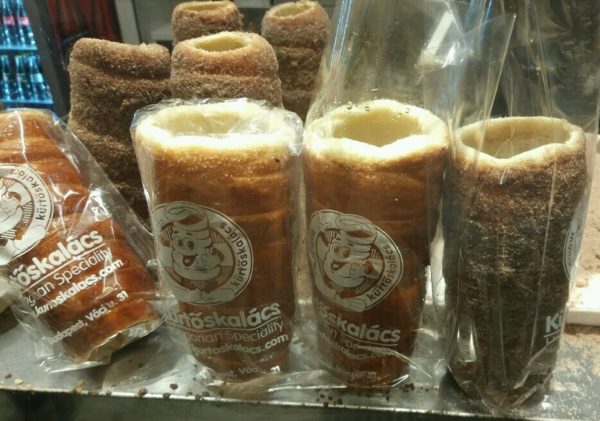 Budapest is a city with a lot to see and discover. But, just as important – it is a city in which there is a lot to taste. And one of the best things to taste is the traditional Chimney Cake.

The Chimney Cake, also named Sekler cake by some, is a sweet pastry, originally coming from Transylvania. It has turned so popular, that not only can you find it on Christmas markets in Budapest (and on other festivals), but you can find special stores selling this. And, if you decide to visit Krakow, Bratislava, Vienna or Prague, you can find the Chimney Cake at larger festivities there as well.

The picture above is taken from Molnar Kurtoskalacs, a store in the main shopping street of Budapest (Vaci utca) in which you can buy these cakes all days of the week.

The chimney cake is a sweet dough cover with sugar. It is then grilled above charcoal (that is the real version), and in this process, the sugar is caramelized. As this process is finished, it is time to roll the chimney cake in either nut, cocoa, cinnamon, vanilla, cocoa, or some other tasty ingredient.

It is extremely tasty, and a sure hit among kids.

Making the Chimney Cake even sweater

Whatever is popular, will be worked on and improved. In the latter years, the Chimney Cake has gotten some improvements to it, even though we are more fond of the original version.

The improvement is that they have started to add ice cream and/or Nutella to the chimney cake.

On the picture above, you can see what it might be like as the chimney cake is stuffed with vanilla ice cream on the inside. Personally, I would rather just eat the normal version, but one of the great things about life is trying new things. And that is important when you come to Budapest… taste new things!

Are you a real Chimney Cake enthusiast? Do not forget about the Chimney Cake festival in Budapest in October.

Would you rather eat some more serious food? You can read more about wine dinners and wine tasting programs in Budapest here.

Thank you for reading this article! We wish you a fantastic stay in Budapest, and should you need help with guided tours, river cruises on the Danube, or some other program, make sure to contact us. More information at https://www.hungarybudapestguide.com/. 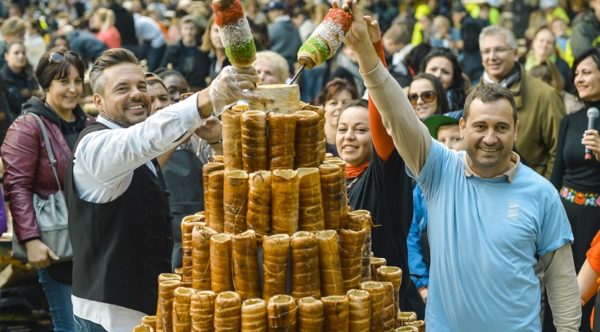 Are you a fan of sweet pastry? Have you ever tasted a cinnamon roll and loved it? Still haven’t tasted the fantastic Chimney Cake (Kürtöskalacs?) Check out this festival in Budapest!

The Kürtőskalács Fesztivál (Chimney Cake Festival) has turned into an annual tradition in Budapest. In 2018, it will be arranged for the sixth time. It has been held at several locations, but it will be arranged at the same spot in 2018 as in 2017, that is, the Gesztenyes Kert (Chestnut Garden). This is located a bit outside the heart of Budapest, but that is only to its advantage. This is a peaceful area, but it will be full of life during the time of the festival.

They have started calling the Kürtőskalács Sekler Cake instead of Chimney Cake, but it isn’t the title, but the taste that matters. In 2018, the festival will be arranged from October 12th till October 14th.

How to get to the Gesztenyes garden?

These are some of the options. You might have to walk a couple of hundred meters from the stops to the actual festival area, but that shouldn’t cause much trouble. The area is very close to the shopping mall Mom Park.

There is no entrance fee, meaning that everyone can come and go in the festival area whenever they want.

What’s going on in the festival area?

There will be daily competitions taking place, there will be interactive stories told to the children, and there will be quite a lot of concerts. On the Saturday evening at 20:00 Kati Wolf will sing. She is most famous for representing Hungary in the Eurovision Song Contest with this song back in 2011 with this song.

Does this sound like a cool program to visit? Mark the dates, October 12th, October 13th and October 14th in 2018.

You can read more about other programs and events in Budapest right here.

We hope you will have a fantastic stay in Budapest. If you have any comments or questions related to this event or something else, please write it beneath this text. We would love to hear from you.

The Kürtöskalács Festival (Chimney Cake festival) is coming to Budapest again this year. This has been the second time visitors can enjoy the best and most delicious kürtöskalács at the festival.

The kürtöskalács is one of the most popular pastries of Hungary and Hungarian speaking regions. It used to be sold as a treat at different festivals but nowadays is a part of the normal Hungarian life. It is made from sweet and yeast dough which is rolled in sugar. During the baking the pastry gets lubricated with melted butter and it gives a golden-brown colour to it. While baking the kürtöskalács, the sugar that stuck on it becomes caramel which makes a crispy crust on the pastry. It is a really delicious and popular cake among everyone who has ever tasted. This year the festival has even more to offer the visitors apart from the most tasty kürtöskalàcs.

At the festival you can get to know and enjoy the best kürtöskalàcs and there will be several other programs you can choose from. This year’s festival is organized by the Vitèz Kürtös Team. There will be multiple programs such as live concerts and children activities as well. At the festival you will even have the chance to learn to bake your own kürtöskalács. The II. Kürtöskalàcs Fesztivàl will take place in Budapest the capital city of Hungary at Vàrosliget. The festival will be held from 10th October until 12th October 2014.

If you want to know more about other festivals, programs and events in Budapest, check the events calendar.

December can be a very cold month in Budapest and in Hungary, but there are plenty of good and nice programs in this period as well. Check out our list beneath for advices and recommendations.

– Visit the popular Christmas markets in Budapest
– Go ice skating in the City Park
– Enjoy the 5 course Hungarian winedinner in the centre of Budapest
– Visit Szentendre for winetasting, shopping, Christmas market and more fun
– Do a daytrip to the Christmas markets in Vienna
– Enjoy a thai massage in Lian Thai Massage
– Visit the Alexandra BookCafe in Andrassy Út
– Check out a performance in the Hungarian State Opera
– Eat a newly baked Chimney cake (kürtöskalács). Eat it while drinking some hot wine.
– Learn how to make Hungarian food at a nice coooking school
– Taste Hungarian beer at our brewery tour

We wish everyone a wonderful December, a merry Christmas and a Happy New Year!