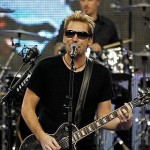 Most tourists like to travel to Budapest, because besides that this city is very historical with the old buildings, modernism arrived here too. In addition the city has loads of programs waiting for its visitors.

Those who likes culture could visit museums, where they can see amazing exhibitions, the gourmets could taste the local specialties and those who wants to party, could find great concerts in the city. Our next article is about a great autumn program, the Nickelback’s concert in Budapest.

The Nickelback is a Canadian band, founded in 1995. The members are Chad Kroeger singer and guitarist, Mike Kroeger bass guitarist, Ryan Peake guitarist and vocalist and the past drummer Brandon Kroeger. The new drummer is Daniel Adair since 2005. The Nickelback released several albums during their almost 20 years career, so they released a Greatest Hits album in 2012. But the band wants the fans could hear their favorite songs in live, so they are going to start a worldwide tour in this autumn, and of course they will visit Europe too. One station will be no other, but the capital of Hungary, Budapest.

You definitely should come to the capital of Hungary, Budapest. Spend some day here, visit the most favorite attractions, taste the delicious meals and drinks, and after that have a great party at 8 November 2013 with the Nickelback at the Papp László Budapest Sportarena in Budapest! Have fun!