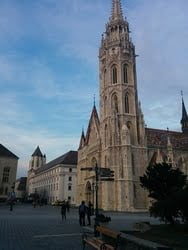 The Matthias Church is a Roman Catholic church located in the heart of the city in Buda’s Castle district right in front of the famous Fisherman’s Bastion. Matthias Church has a long history which dates back to the 13th century. During the centuries the church had a central role not only in the every day life of Buda but it gave home to the coronation of the Hungarian kings as well. At the exhibition visitors will have the chance to discover the rich history of the Matthias Church through the several exhibited objects, such as the furnitures, tools and clothes that were used in the Hungarian medieval era and visitors can also have a closer look on the secular importance of the church.

If you want to know more on exhibitions in Budapest, click here.

Press release
Civil society, civil values, and civil morality. Still expressed on many occasions today, these terms conveyed different meanings in the 19th and 20th centuries. Citizens and the set of civil values often became the supreme motif of social and political programmes in modern and contemporary history, hence the crucial deprivation of their original connotation that took place as a consequence of the constant attempts of their redefinition. Who can be regarded as a “true” citizen anyway? What are the prime elements of civil mentality and morality? How did the term “citizen”, which we regard as either an example to follow or an enemy to be destroyed in specific cases even today, come into being? This exhibition has been intended to give answers to the preceding questions.

John Calvin was a very important character in the reformation that took place in the start of the 16th century. Together with Luther they opposed the Catcholic Church and later they opposed one another. Today we can see the result in the Lutheran and in the Calvinist (Reformed) church.

In this exhibition taking place in the Budapest History Museum you will meet with John Calvin and his impact and influence on our culture and lives, along the Danube. The exhibition is being arranged as a part of the celebration of his 500 year anniversary (he was born 500 years ago).

The exhibition in the Budapest History Museum called “Friends in Misery – Polish Refugees in Hungary 1939-1944” is soon about to end. The last date for the exhibition is October 22nd, so if you are interested, but have not had the time to see it yet, you better get going.

Some useful background information:
During the Second World War around 100-140 thousand Polish refugees were staying in Hungary. In the fall of 1939 ca. 70-90 thousand Polish soldiers and civilians entered the territory of Hungary. The majority left till the spring of 1940 but till the end of the war around 30 thousand soldiers and civilians stayed in Hungary as Poland did not surrender officially even after the defeat. The Polish government and the military headquarters was reorganized in France and several outstanding politicians and military leaders fled to France often through Hungary.