People usually say that the capital of Hungary, the scenic Budapest is the most beautiful in the period of late spring and summer. At this time everybody is on the outside and enjoy the sunshine. There are lauds of open air programs and other exhibitions in the city, for example the exhibition of Gábor Ősz in the Museum of Contemporary Art in Budapest. He is a Hungarian photographer lives and works in Amsterdam.

Gábor Ősz was born in 1962 in a Hungarian city, Dunaújváros. He started his studies in 1982 at the Academy of Fine Arts in Hungary, and he graduated in 1986. He started his work in Hungary, but he moved to the capital of Netherland, Amsterdam in the 90s, and he lives and works here. Moreover he had exhibition in France and in the United States of America too. His beloved picture composing device is the camera obscura or the hole camera, the gist of which is that light gets into a dark cell or box through a tiny hole, and this light draws the upside-down image of the outer world within the camera obscura, on the side opposite the hole.

The artist’s newest exhibition will be in the capital of Hungary, in Budapest at the Ludwig Museum between 26 July 2013 and 3 November 2013. If you will spend some days on Budapest during this period, you definitely should visit to the Museum of Contemporary Art and let the works of talented Hungarian photographer enchants you. Have a great time! 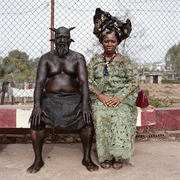 Pieter Hugo was born in 1976 in Capetown, South Africa. He chose the photographer profession, and he focuses on Africa’s social and economic conflicts, and the actual problems and challenges of the transforming continent. The artist, earlier working as a photo reporter, won the price of the most prestigious press photo competition, THe World Press Photo, in 2006, and opened an independent show at the Hague Museum of Photography in 2012.

He takes beautiful, real and sometimes sad photos. Those who are curious about Hugo’s work, travel to the capital of Hungary, the scenic Budapest, because there will be a fantastic exhibition about Pieter Hugo’s works between 2003 and 2012 in the Ludwig Museum, or on another name the Museum of Contemporary Art, for 24 May 2013 to 11 August 2013.

The capital of Hungary, Budapest is a perfect destination for everyone. Travel with your family, friends or love to this beautiful city, where something always happens. There are wonderful buildings, for example the Buda Castle or the Parliament. Fantastic hiking places in the city or out the city are the Margaret Island, the Gellert-hill or the Budakeszi Forest. Delicious wines, special dishes invite tourists. And the list contains the culture too, because there will be an amazing Pieter Hugo exhibition at the Ludwig Museum? What do we need more?

When somebody goes to the capital of Hungary, Budapest, there are several attractions what must see for example the famous Buda Castle, the Parliament, the beautiful Margaret Island and of course the famous river, the Danube with all bridges, especially the Chain Bridge.

In Budapest there are regularly festivals, activities and exhibitions. The several beautiful museums wait for the visitors with amazing permanent and temporary exhibition in the whole year. One exhibition of them is “The Other Half of the Sky. Selection from the Ludwig Museum’s Collection” too.

The Ludwig Museum, or on another name the Museum of Contemporary Art opened in 1989. The museum always has made its mission to present and collect the phenomena of Eastern European, American and Western European contemporary art in their entirety, and to gauge the multi directional and fruitful connections the artists of the region had with post-war international tendencies and art centers. And now there is a fresh exhibition, which especially shows the contemporary art collection before the museum’s foundation and the Regime.

The exhibition opened on 6 December 2012 and it waits for the visitors until 1 January 2014. Do not miss the contemporary art exhibition which contains fantastic masterpieces, because it would make unforgettable your holiday in Budapest. Have a great time!

Maybe not everybody knows the name of the famous not-artist, poet an and happener, Tamás Szentjóby. His widespread art name is St. Auby Tamás, which is a nickname from his last name. He was born in 1944 in a Hungarian town, Fót. He is the first happener of Hungary. He founded the The International Parallel Union of Telecommunications

(IPUT) in 1968, because of the collective operation of the levels of reality which is parallel with the Status Quo. Its central idea: “The art is hokum. The history is hokum. Art is everything, what not allowed. Be not allowed!” He had to leave the country in 1975, and he could come back only in 1991.

In the capital of Hungary, in Budapest, at the Ludwig Museum or Museum of Contemporary Art gives place to this surrealistic not-artist’s exhibition, which shows the most outstanding works of St. Auby Tamás with enormous social criticism, between 1 March 2013 and 28 April 2013. If you are curious about the opinion and creativity of the talented rebel, you definitely should visit this exhibition, if you are in Budapest during the opening time.

Organize a lovely long weekend to the capital of Hungary, the amazing Budapest. View the most popular and most beautiful attractions in the city, for example the Buda Castle, the Parliament and of course the River Danube with all the bridges, especially the Chain Bridge. We are sure, you won’t regret this spring holiday, especially if you visit St. Auby’s special exhibition. Have a great time!

First of all we have to warn every interested reader that this exhibition contains objects not recommend for kids, so visit this only in the presence of an adult. 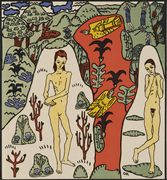 The naked man fell into oblivion since the antiquity; the stronger sex’s body without clothes was taboo for a long time. But the naked woman body was a totally acceptable and beautiful view in the arts. The Naked Man exhibition wants to change the opinion, that the naked man body isn’t nice. The exhibition was seen in the LENTOS Kunstmuseum in Linz between 26 October 2012 and 17 February 2013. The institution celebrated its 10th anniversary with this exhibition. A part of the exhibition is seen now in the capital of Hungary, Budapest. The pictures want to show especially the naked men of the Middle-Europe and Eastern-Europe. The exhibition waits for the visitors between 22 March 2013 and 30 June 2013. The exhibition shows act models since the years 1900 to nowadays.

The Ludwig Museum in Budapest or the Museum of Contemporary Art is one of the most outstanding institutions of Hungary, where there are several great permanent and temporary exhibitions always. When somebody visits Budapest for a couple days, this museum is a must see program. Moreover, The Naked Man exhibition makes interesting and unusual the museum visit. Have a great time!